With so many different Stanley Blades to choose from, it can be hard to know which one is right for you. This guide talks about the Best Stanley Blades and which are suited to each application.

Stanley are one of most well known knife blade manufacturers on the planet. With so many different Stanley Blades to choose from, it can be hard to know which one is right for you. That is why we have created this Toolstop Guide. This guide talks about the Best Stanley Blades and which are suited to each application.

What Blades Should you buy for your Stanley Knife?

Stanley is world-famous for its production and manufacturing of knives and blades. Their base is Sheffield – and the town itself – is synonymous with blades and the steel they’re made from.

We learned recently that Stanley is moving more and more of their blade and tool manufacturing processes back to Sheffield, which will be a huge boon for the local economy, and marks the company’s commitment to high quality output.

When you buy a Stanley tool or consumable, you’re buying the Best of British. The company is perhaps most famous for their knives and blades.

Such is their prominence and position within this market that the term “Stanley blade” is used to describe utility blades and knives, regardless of manufacturer. But, as Stanley itself will point out, only it has the rights to use that brand name.

At the outset of this Toolstop guide to buying Stanley blades it’s important to remember that Stanley make knives and blades. The blades are used in the knives, and the knives are products in and of themselves.

In this buying guide, part of our #DIYTradetips, we’re focusing solely on the various blades manufactured by Stanley. These blades are commonly used in Stanley’s range of fixed and retractable knives and are different from the “snap-off” variety. Click the product title to shop the Stanley Blade model.

Which are the Best Stanley Blades?

The journey man of Stanley utility blades, the 1991 is the ideal knife blade for use in any of Stanley’s fixed or retractable. Who’ll benefit from having a Stanley 1991 Utility blade in their kit? Anyone who ever needs to cut lighter weight materials like:

Perhaps the best known and most widely used blade manufactured by Stanley, the 1992 is your basic, heavy-duty, general purpose blade. Use it in your Stanley 2-10-199 Fixed Blade Classic 199 Knife for day-to-day cutting tasks such as trimming paper, shaving wood etc.

The 1992 is cheap, cheerful and will fit in all Stanley fixed and retractable knives. It will handle cutting carpet, vinyl and most materials where you’d need a stiffer and stronger blade. Who’ll benefit from having a Stanley 1992 Utility blade in their kit? Simply, anyone who ever needs to make sharp cuts on a fairly regular basis. 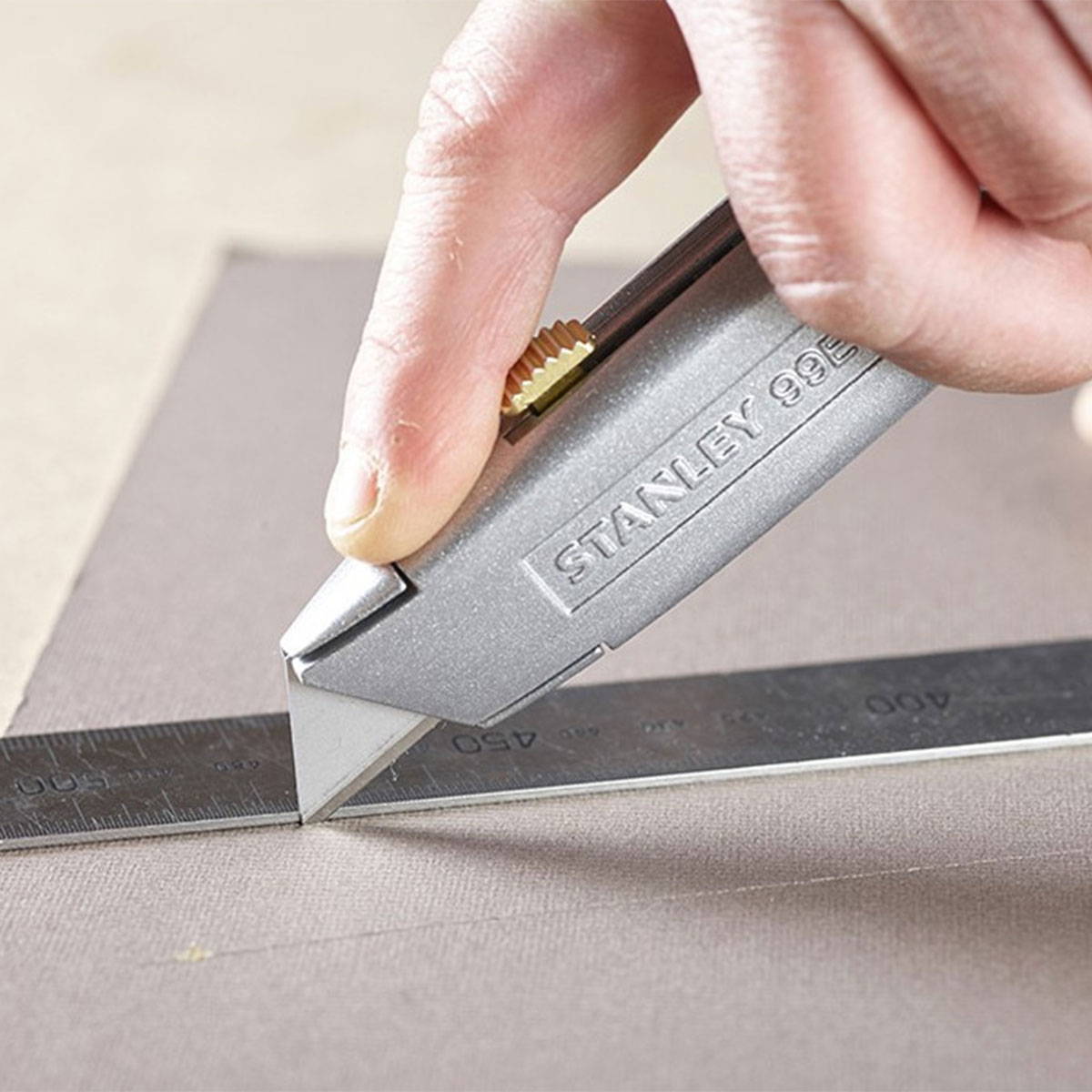 Stanley recognised that their utility blades aren’t always the best choice of knife blade for every cutting task. For example, if you’re cutting sheet material, using a standard trapezoid-shaped Stanley utility blade may cut through to the layers beneath the sheet you wish to cut. To work around that problem we would recommend buying a Stanely Hooked Knife Blade. This model looks very different from other Stanley blades in that it has a hooked cutting edge at each end. This allows you to quickly and easily hook the blade over the end of the sheet you wish to cut, then draw back, cutting only that layer of sheet material.

Who’ll benefit from having a Stanley Hooked blade in their kit? Anyone who has to regularly cut sheet material such as floor coverings and plastic sheeting.

Stanley describe the FatMax blade as their “strongest, sharpest and longest lasting Stanley blade ever“. The reason they make this big claim is the stated abilities of this utility blade:

This isn’t to in any way discredit the 1992 blades. They remain Stanley’s best selling, and best know, blades. However, the FatMax is in a league of its own, a status confirmed by it’s ability to resist snapping against weights of up to 35kg. These specs, however, need to be weighed against the fact that FatMax blades cost a bit more. But, as already stated, they will last longer and perform better, so you’ll typically use less of them on a day-to-day basis.

Who’ll benefit from having a Stanley FatMax utility blade in their kit? Anyone who uses a knife, either fixed or retractable, on a regularly basis, every day. They’re especially ideal for carpet fitters and dry liners, or anyone who needs to make sharp cuts in tough material, over and over again.

Tungsten carbide is basically just grey powder. However, when it’s applied to the cutting edge of a blade it transforms said blade into one that will last up to 5 times longer than conventional blades, while being sharper and more durable. Stanley have laser deposited tungsten carbide power to the cutting edge of their blade and have a produced an incredible thing of cutting power!

What’s the advantage to spending a bit more cash on a Stanley Carbide utility blade? Simply, they last longer and will cut much harder materials. So, rather than spending time opening up your knife, changing the blade, reclosing the knife and getting back to work, you can keep working for longer. On top of that, the carbide coating on the blade edge means it stays sharper, again for longer.

Tungsten carbide coatings typically make whatever its applied to harder and stiffer. However, Stanley have only coated the blade edge, so the rest of the blade will flex as normal while you cut. Who’ll benefit from having a Stanley Carbide utility blade in their kit? Carpet fitters, dry liners and anyone who uses a blade all day every day and doesn’t want to have to keep changing them while they work. Stanley Carbide utility blades are suitable for use in Stanley fixed and retractable knives.

We’ve produced a video overview of the blades made by Stanley which you can watch below: