FREE Delivery On Orders Over £49

Finance Available From From £150

FREE Delivery On Orders Over £49

The Makita DMR106 is an all new Job Site radio featuring Bluetooth connectivity. This Makita site radio will be your new best freind, giving you the freedom to listen to your own songs, or radio stations. You can even connect and charge your mobile phone with this makita bluetooth radio.

The Makita DMR106 is an all new Job Site radio featuring Bluetooth connectivity. This Makita site radio will be your new best freind, giving you the freedom to listen to your own songs, or radio stations. You can even connect and charge your mobile phone with this makita bluetooth radio.

Makita DMR106 Jobsite Radio - Everything you need to know

Makita’s done job site radios for ages, and they’ve done them well. On our travels we regularly see the blue and black boomboxes, even some white ones, on job sites proving that they’re a popular choice for on-site tunes, especially if you’re already packing Makita’s battery packs.

The DMR106 radios mark a slight evolution in Makita’s offerings, and in this article, we’ll take a look at what’s on offer from them and why you should consider upgrading. At first glance, as you’ll see in our video below, the Makita DMR106 keeps a familiar form factor previously found in such radios as the DMR104. Tall, strong and elegant, with speakers outputting your tunes on each side.

Is it the Best Makita Site Radio?

However, those speakers are just a little bit larger now, giving the DMR106 more output than previous models. If you’re running it off an 18V battery, it’ll give you 3.5W per channel.

Another improvement is the antenna. Obviously, the built-in digital tuner needs an antenna to pick up the radio waves, however, a problem with these can be their vulnerability; when lugging the radio around with your boxes of tools, it’s can be easy to accidentally break it off. Makita has tackled this issue by making the antenna on the DMR106 retractable. It folds back into the body of the radio near the handle, protecting it from knocks and bashes in transit.

All around the DMR106 are signs that its designed to take a knock, from the elastomer bumpers on all the corners, to the fact that it’ll survive a shower of rain (up to 5 minutes), ideal for when you’re working outside in the sunshine. You’ll have enough time to rescue it from the inevitable British summer shower…and should you, in your panic to get it out of the rain, drop it, it’ll survive up to a 1m fall.

As mentioned above, the DMR106 benefits from a digital tuner, helping you quickly and easily find and store in its memory your favourite radio stations. It also has an auxiliary-in jack, so if you’re rocking an old-school iPod or mp3 player, you can plug it directly into the DMR106 and blast your own favourite playlists.

This has been moved into the rear battery case now, so you need to unlatch the cover, fold it back, and you’ll find it next to the starred battery terminal.

With regards to running it from your Makita batteries, again you slot them in via this panel on the rear of the radio. As mentioned, it takes 18V lithium-ion – all capacities, but also 10.8V, 14.4V and even the 7.2V batteries found on the more DIY-focused Makita power tools. And it even comes with a power cord when you want to run it from the mains (but it won’t charge your batteries).

It will charge any USB device thanks to the inclusion of a USB charging port, so if you’re running out of juice on your phone, plug it in and give it a top up.

Now, we’ve already seen comments lamenting the lack of DAB on the DMR106. And yes, it’s true, this is one feature missing from it. For DAB capability you’re going to need to go for the DMR104. 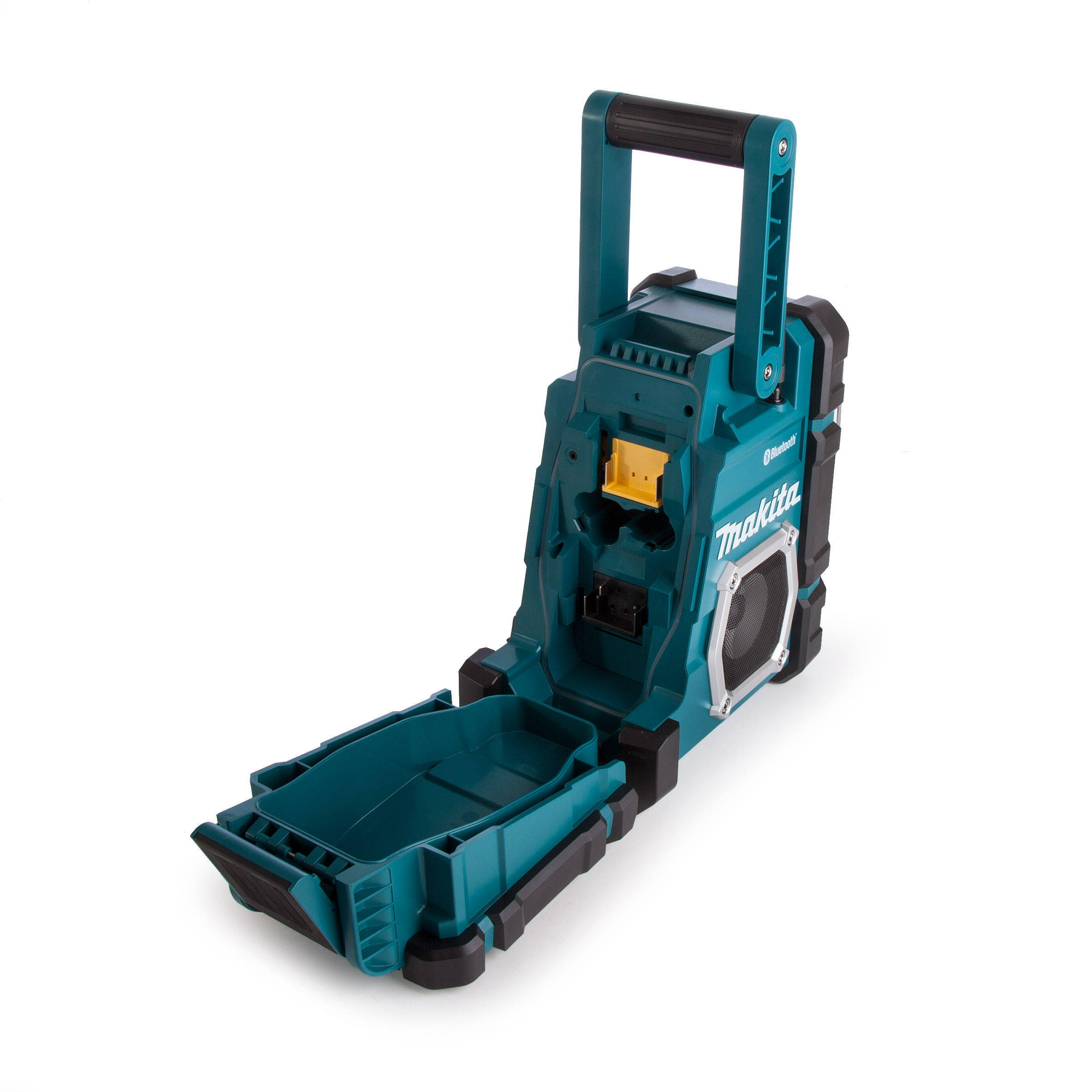 The DMR106 is clearly aimed at those of you who want to listen to your own choice of music, playlists and podcasts while you work, rather than the traditional radio station offerings. So, as well as the aux-in, the DMR106 benefits from Bluetooth connectivity.

We’re seeing this more and more all over the place, from the stereo systems in our kitchens, to the ICE in our cars or vans, so it’s great to see Makita building this functionality straight into their latest jobsite radio. The ability to pair your smartphone or tablet via Bluetooth to the radio means you can keep your device on your person rather than hoping it’ll be safe and sound in the radio’s little device compartment. Bear in mind, though, that Bluetooth has limited range, and the DMR106 promises a range of around 10m, which is fairly standard.

However, we think this will open up a world of possibilities for you using the DMR106 away from the jobsite! For example, what about as a soundbar for when you’re watching movies on your tablet or Bluetooth enabled TV? Genius!

Makita DMR106 – How to Connect Your Device Using Bluetooth

Connecting up your phone or tablet via Bluetooth to the DMR106 is really easy. Use the mode select button to get to “BT”, press and hold it. Once it’s ready, press the number 1 button and scan on your devices’ Bluetooth settings until “DMR106” shows up. Tap to connect. Sorted.

Whenever your device is within range of the radio, it’ll be connected, as long as the DMR106 is in Bluetooth mode. We’ve got a quick video showing you these steps below:

What happens if you get a call on your phone while you’re connected to the DMR106?

Well, the music you’re playing will pause, but you’ll obviously need to answer the call on your phone. Once the call’s over, the music will restart automatically.

What’s your thoughts on Makita’s DMR106; a worthy upgrade? Is the lack of DAB a problem for you, or do you see the built-in Bluetooth connectivity as being a godsend?

Check out these other Jobsite Radios at Toolstop: